I started this blog with www.agidea.uk on version 8.0.2 earlier in the week?—?so some issues are being cleared up all the time so some of these thoughts will age really quickly. But that was Monday morning, in the afternoon I found a spare 15 minutes & upgraded to 8.1.0.

ONE: Umbraco Cloud upgrades are brilliant. I’ve blogged separately about point upgrades, but it’s a really simple process?—?with the patch upgrades simply implemented without fuss on Tuesdays. So with point upgrades being so simple & patching automatic, there really is only complete version shifts to worry about.

TWO: Less good, document type switching has gone. A really important improvement available in Umbraco 7 was the ability to switch document types. Using alternative templates has been with us since version 4, but document type mobility was really cool. Hopefully will be fixed soon.

THREE: An odd error with images crops up if you choose to force a back-office editor to pick an image (as opposed to a file or a folder). I’ve got a feeling that this is related to the builder modes?—?but I’m not sure. 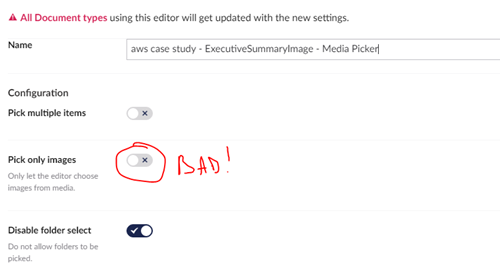 FOUR: On Builder Modes I wonder if the default PureLive model (which as default I guess will be in 90+% of Umbraco 8 websites) is a nod for the increasing dominance of front-end-dev-ery. Back-end devs aren’t happy without intellisense, which you don’t get on PureLive models?—?but perhaps defaulting to a setup that doesn’t require you to know anything about DLLs enables a lower barrier to entry for front-end devs. I’ll blog about transitioning between PureLive & a model setup that allow intellisense on Doc Type fields another time.

FIVE: Reordering document type fields is a pain, composites sometimes come before inherited items, sometimes new sections are & there seems to be no way to reorder them. There are ordering numbers but no edit option?—?perhaps a short-term bug. A workaround is to use F12 & take off the disabled = “disabled” on the HTML & you can reorder them?—?but save doesn’t work properly or consistently. Perhaps a short-term bug?

SIX: Training is becoming more online & the opportunity to meet people & the build the community is diminished as a result. The last Umbraco training I went on was way back in 2012, but at the time I met Darren Ferguson, Andrew Knox, Matt Brailsford, Paul Wright & others. Not the same opportunities to build a network through online training.

SEVEN: After speaking to our Umbraco account manager he confirmed that certifications hold for 2 versions so Umbraco 6 certifications are no longer valid. I would guess that Umbraco will now target a 2 year release cycle now they have a new code base & that would mean that Umbraco 7 certification will expire in 2021?—?which will be a big shock to agencies that have built up 6 years of Umbraco 7 creds.

EIGHT: Since taking on the challenge of hosting 2 Manchester Umbraco meetups a year (heady responsibility) it’s clear that the engaged audience in Manchester has drifted away since that sultry night when Niels popped over. Perhaps that’s a function of rebooting a meetup that has slipped off the schedule for many devs, perhaps the lack of local training has made Umbraco shops more insular & less happy to share. Hopefully this can be reversed as I reckon meetup strength is a bellwether for the community strength.

NINE: Content porting from 7 to 8 has been added to Umbraco 8 since the early days of the release. Not used it but the word on the street is that it works?—?which is a big tick.

TEN: The auto-upgrading feature on Umbraco Cloud is a great feature. We went from 8.1.0 to 8.1.1 overnight without noticing. I wonder whether the future for Umbraco Cloud is to automate-all-the-things so that using other hosts or Cloud providers is financially & logically pointless.

ELEVEN: On the flip side Umbraco Cloud does seem to suffer from performance & slowdown issues most weeks. Our website isn’t complex or a high traffic site so this isn’t a concurrency issue. I think service reliability should be a higher priority for the service if it is to dominate Umbraco hosting?—?perhaps steal from AWS’s brilliant Well Architected Framework as a target?

You could also look at the first 8 thoughts I had on Umbraco 8.